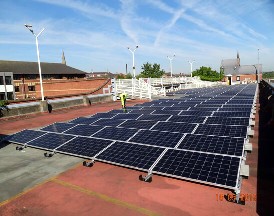 Whilst we have seen residential customers installing the complete set of solar PV, battery storage, and electric vehicle chargepoints, it’s something of a rarity at a larger scale.  Rotherham Metropolitan Borough Council, however, have just completed a £600k scheme installing electric vehicle charge points across the borough, combining this with solar PV and battery storage at some of the sites.  Steve Brown, Transportation Officer, explains: “We’ve been very interested in the potential to replace our diesel/petrol fleet with electric vehicles to reduce carbon emissions and address air quality in the borough.  But we were very aware that doing so would increase our electricity consumption, and nationally there’d be a problem generating the electricity.  So we have looked to manage these knock-on effects ourselves by installing an equivalent amount of solar PV at the same time to offset this.”  And it’s not just the amount of new electricity that was a concern: “We wanted to use batteries to store this sustainable energy for us to use when we needed it, rather than when it was available”

The flagship site in the programme is the Wellgate multi-storey car park, which features 5 dual Alfen Eve charge points, 87kW of solar PV and 3 Tesla Powerwall’s for storage.  The solar PV was hosted in a unique way, on the top deck of the multi-storey.  “It’s an odd feature of almost every multi-storey car park in the country that no-one parks on the top-deck”, says Steve.  “They’re massively underutilised assets, so we took the decision to close the top deck and use this space for generating solar electricity.”

If we build it, they will come

“The main difficulty we had was whether the scheme would work at all”, said Steve.  “There’s a certain amount of ‘If we build it, they will come’ when developing a chargepoint scheme.  But Rotherham does not have the same level of per capita income as parts of southeastern England, and we didn’t know how quickly the community here will take up EVs, as they are still more expensive than petrol or diesel vehicles.”

Funding from the Government’s Clean Air Fund early measures programme provided the initiative to get the scheme off the ground, and Rotherham Metropolitan Borough Council instructed Joju Solar to install the project, following a mini-tender through the ESPO Framework.  Joju Solar are uniquely well placed to deliver schemes like this as we are one of the largest installers of Public Sector EV charge point programmes, as well as having decades of experience installing solar PV and battery storage.

“Our fears have been unfounded – the chargepoints are being widely used, and people are prepared to use charge points at outlying council offices and country parks.  From our point of view, it’s worked extremely well”.  The Council are seeing the solar PV generation being used on their own sites, reducing bills, and the battery storage is covering lighting requirements overnight.

Rotherham’s approach appears to be paying dividends, and there’s an appetite for more.  “The whole system has been really well thought out – there’s chargers in the basement for staff and outside for public use.  We’d like to do more of the same – perhaps in innovative locations like schools and colleges as well”.

Rotherham Metropolitan Borough Council’s pioneering scheme is a strong example to other councils, particularly in the way that they have looked at the larger energy picture.   Electrifying transport will inherently increase demand for electricity, and it shows a truly holistic approach to sustainability to consider how this will be provided as part of one installation programme. 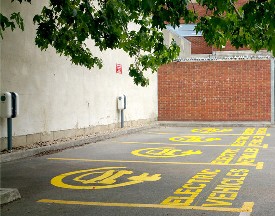 Project management over such a large-scale project for one council have been challenging as cooperation with many various stakeholders and council departments have been necessary to arrange for site surveys, specify charge point locations and moreover.  Joju’s Operations Director, Joe Gabriel explains: “With so many sites wrapped up in one scheme, smooth coordination of the works is critical to delivering the scheme.  Good communication, and flexibility in the delivery programme is essential to coordinating the installation works.  That’s why each project has its own dedicated programme manager, and why we use our own in-house electrical teams“.

Hampshire County Council have already planned more instalments of electric vehicle charging points for their evolving fleet and they are currently increasing their public charge points. As pioneers in this space, Hampshire developed their own procurement framework (Central Southern Regional Framework) for the works, which is now being offered across the south of the UK.  This will allow other councls and public bodies to benefit from Hampshire County Council’s experience, and be able to replicate this kind of scheme in their own area.  The intention is to grow this to become a uniform public charging network across the entire region. 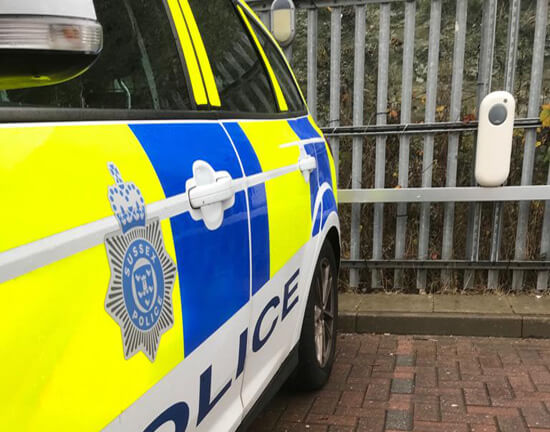 “The trouble is that the bad guys don’t have environmental targets”, declared Dennis Ord,
Head of Transport for Surrey & Sussex Police.  “That means our priority is a vehicle that can deliver the performance we need, but also at low environmental impact”.

With this in mind Surrey and Sussex Police purchased 60 BMW i3 full electric cars.   The vehicles will be used by officers to carry out day-to-day policing activities such as visiting victims or witnesses to take statements, or as part of door-to-door inquiries.   Environmental targets were not the only benefit here – the much lower running costs of electric vehicles compared to diesel or petrol, means that each force is expected to save £120,000 over the next five years.  That’s valuable funds that can be used elsewhere in the police budget.

Of course, the 60 new electric vehicles needed their own dedicated chargepoints, and with the vehicles on order, installed at short notice.  Surrey and Sussex Police decided to procure through the Central Southern Regional Framework, run by Hampshire County Council, which offers a streamlined procurement process, whilst simultaneously ensuring high quality products and service.  The Central Southern Regional Framework is available to all councils and public bodies (health service, police, fire etc) within the south of England.

30 fast chargers were installed for Surrey Police for across 8 sites in November 2018, followed by a further 40 chargepoints for Sussex Police in December 2018.  “Our main challenges were the rapid turnaround times required – if the vehicles arrived and they couldn’t charge, it would have been a disaster”, said Joju’s Operations Director Joe Gabriel.  “These were also live police sites, requiring careful project management to ensure disruption to police activities was minimised.”

The Police are modernising their policing with the procurement of a fleet of electric vehicles and associated infrastructure – benefitting the environment and their balance sheet at the same time. As such it is a perfect example of both the benefits of institutions switching to electric fleets and of how public institutions can procure the necessary infrastructure. 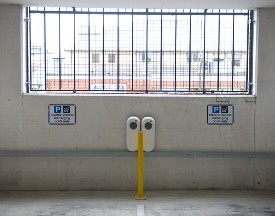 Southampton City Council have just completed the installation of 30 electric vehicle chargepoints in the city centre multi-storey car parks.  The scheme is part of a wider city council programme on clean transport aimed at improving air quality in the region by reducing particulates and NOx emissions, which includes encouraging public transportation and  reducing idling engines.  Councillor Christopher Hammond outlines the case : “We’ve been one of 5 places in the UK identified as having an air quality issue, so addressing this is a priority for our local sustainable transport agenda. We’re working extremely hard to improve local air quality in Southampton and encouraging the uptake of electric vehicles is a very important part of our strategy.”

The idea behind the EV charging station programme is to encourage the uptake of electric vehicles in the region by making public charging infrastructure more visible.  When the public can see that there is a wide network of public EV charging stations, it reduces range anxiety and encourages the purchase of EVs.  As EVs become more widely adopted this will have positive knock on consequences for air quality, as well as lower CO2 emissions from a climate change perspective.  “We’re also encouraging the uptake of electric vehicles by offering a 90% reduction in parking charges, and we’re consulting on making the Itchen Bridge toll-free for electric cars.”

Southampton City Council settled on 5 central multi-storey car parks for the first phase of their EV charge station programme, with 6 chargepoints installed at each location.  The sites have high usage, and comparatively long stay times, which means the chargepoints will have good utilisation.  Additionally, electricity already existed on site, and new grid supplies did not need to be installed.  This allowed a quick turnaround on the project, and Joju completed the project around  in 6 weeks from contract award to commissioning and handover.

The council chose New Motion smart chargers for the project for three main reasons.  First, they offer dynamic load balancing, which allows available power to be smartly allocated between cars without overloading the electrics.  Joju Operations Director, Joe Gabriel, explains: “We’ve installed a 22kW 3-phase connection at each site to power the 6 chargers.  If one car is charging, this will receive the full 22kW, equivalent to a 3-phase fast charger.  If three cars are charging, each will receive 7.2 kW, equivalent to a normal fast home charger.  And if all 6 bays are in use simultaneously this drops to 3.6kW.  It means we can be certain we won’t overload the wires if there’s a high charging demand.”   The units also allow users to access via a smart card, and although the scheme will be free initially, in future it will allow the council to make a small charge to the users.  Third, the council also liked the “simple, sleek, smart and subtle” look of the New Motion units, which were considered less gaudy than other alternatives.

Although the works were broadly straightforward, the scheme wasn’t without operational challenges.  The Marlands site had an old electrical fuseboard which required shutting down by the grid operator so we could safely make the connection.  A 2-hour slot was scheduled to make the connection, during which time all lifts in the multi-storey were out of action.  The Joju team managed the flow of people and cars during this time to ensure that customer visits were as hassle free as possible while the works were carried out.

Rob Gloyns, Clean Air Zone Project Officer commented:  “We were grateful for Joju’s smooth project management as it allowed the council to take a more hands-off approach to the delivery phase.  They have been extremely straightforward to deal with, and we’ve known exactly who at Joju has been dealing with what.”

Councillor Hammond sums up the first phase of the scheme “We’ve been very pleased with the partnership we’ve built with Joju to install these units – it’s been a seamless piece of project delivery, completed to a very high standard.”  The programme can now focus on expanding the scheme to other areas of the city, including ground car parks and on-street parking.  Joju have also recently won a tender for the installation of EV chargepoints across Hampshire, so the Southampton scheme will be integrated with a wider EV charging station roll-out across the county.