Solar Energy and the Seasons

As a solar engineer, it’s my job to understand the movement of the sun across the sky throughout the year.  However, a technical understanding of solar movement often feels at odds with my appreciation of the world around me.  That confusion comes from our cultural perceptions of the seasons, and their definitions.  So, when exactly do spring, summer, autumn and winter start and end?

From a solar perspective, we can look at the movement of the sun across the sky.  We know that at the summer solstice, June 21st , that the sun reaches it’s highest point in the sky, and that our days are longest.  Similarly, at the winter solstice (December 21st), the midday sun is at its lowest point in the sky, and the days are at their shortest.

Midway between the two solstices lie the spring (20th March) and autumn (22nd September) equinoxes.  These dates don’t get as much attention as the solstices, but consider this – on the date of the equinoxes, everywhere on the planet receives exactly 12 hours of daylight.  It doesn’t matter if you’re in Aberdeen or Abu Dhabi, on these days, everyone is equal.

These definitions imply that the solstices and equinoxes are the midpoints of the seasons.  It’s always annoyed me when people talk about the summer solstice as the first day of summer – from a solar energy perspective it’s the middle of summer!  Crazy fools!

It’s something our pagan ancestors understood very well.  We know that they understood the passage of the sun across the sky in intricate detail – look how Stonehenge aligns with the summer solstice, and the entrance passageway to Newgrange in Ireland aligns with the winter solstice. The four points between the equinoxes and solstices were marked with festivals, each denoting the beginning of a season.  Beltane (May 1st) marked the start of summer, and Samhain (31st October) the start of winter.  These two, in particular live on in modern times.  May 1st is still celebrated as the start of summer.  In Oxford, for example, 1000’s of revellers gather at dawn to mark the start of summer, with choir singing, morris dancers, bands, and (lets be frank here) the chance to go to the pub at 6am.  Simialrly, Samhain marked the start of winter, and now lives on as Halloween.

Similarly, the start of spring was celebrated on 1st Februray (Imbolc) and the start of autumn (Lughnasadh, or Lammas) on the 1st of August.

And this is where the whole thing falls apart for me.  Really?  Autumn starts on the 1st August?   A week ago we had the hottest day the UK has ever seen, and today it’s meant to be the start of autumn?  Are you kidding me?

The above description of the seasons doesn’t even tally with what we were taught at school.  Back then, I was told:

So what’s the difference?  It comes about because our perception of the seasons is more about heat than light.  There is a lag between the times of maximum sunlight and the times of maximum heat, as it takes time for the land and oceans to warm up.  This means what we feel (temperature) is out of phase with what we see (sunlight).  If we consider the lag between sunlight and heat to be 1 month, that shifts the solar definition of the seasons in line with what we were taught at school.  If we consider the time lag to be longer at 6.5 weeks, then the crazy fools who say the summer solstice is the start of summer, would actually be correct.

Temperature in London, UK peaks after the summer solstice (from www.yr.no)

What if there aren’t 4 seasons?

Now here’s a thought.  What if there aren’t 4 seasons throughout the year?  In north European climates, the year can actually be divided into 6 seasons of 2 months each.  These are based on ecology – the observed plant and animal behaviours that are seen exclusively in these seasons.  They are defined as: 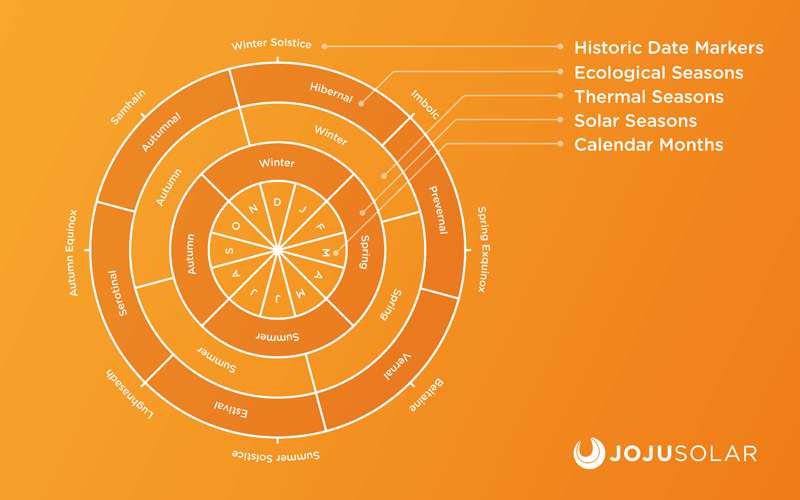 For me, this seems a much better description of the passing of the year.  The ‘extra’ seasons of pre-spring and harvest capture those time of year perfectly, autumn is reserved for just the period of falling leaves, and brilliantly, winter is only 2 months long.

So, as I write this on 1st August, welcome to the start of Serotinal!   That sounds a bit of a clunky phrase – and it might take a while to catch on!  But it doesn’t sound as weird as autumn starting, when its 25 degrees outside.

So, take a look around, observe your surroundings, and find which one of these three seasonal definitions suits you best.