Using a home battery in a power cut

In March 2019, Phil was relaxing watching TV after dinner, when there was a knock at the door.  In the darkness outside stood a young woman, clearly distressed.

“I don’t know how on earth you’re the only person in the street with any electricity.“, she said.  “But can you please, please help me by warming up this bottle of milk for my child?”

Phil, who knew his home battery was nearly full, naturally agreed to help.

This story has a happy ending, because it’s now possibe to use solar and home battery systems to ride through a power cut, and keep your home fully powered 24/7, 365 days a year.

Joju can offer these market leading home battery systems, each capable of providing continuous power to your home.

The battery storage unit is a standard 13.4kWh Tesla Powerwall 2, but the standard gateway is replaced by the specialist back-up gateway.  This looks like a miniature version of the Powerwall2 itself, and contains a substantial relay which completely islands the house in the event of a power cut. It will need to be positioned on the grid side of the main consumer unit (or fuse board).

The integrated 5 kW battery inverter is large enough to cover most electrical loads in a modest sized house. For some properties, it would therefore be possible to wire the Powerwall to cover the whole house in a power cut.

Larger houses have the option of separating critical loads for back-up or physically turning off the higher loads and waiting a few minutes for the battery to kick back in. 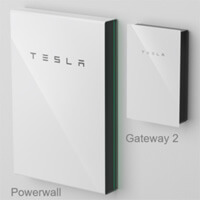 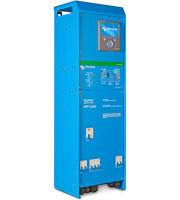 Victron are old hands in the inverter back-up and off grid market and adopt a slightly different approach.  Their solar inverters actually contain the grid disconnection relay, and are wired between the incoming supply and the fuseboard.  They can be used in conjunction with their own Lithium Ion batteries or third-party batteries. The inverter can output between 500W and 15kW of power, although this is sized to your solar rather than the battery.  If you are looking for a relatively inexpensive backup system then it would be good to consider Victron.

Victron inverters are UPS standard. This means that the changeover to backup is fast enough to avoid data loss on servers.

How does a home backup battery system work?

It sounds easy – there’s a power cut and so you just run your home off the battery instead. Sadly, it’s a little trickier than that, so here are the key things you’ll need to consider.

The main complexity with using batteries for backup power is that they have to comply with strict safety requirements. If there’s a power cut, engineers will need to work on the electricity lines on the grid, and there cannot be the risk of any form of generation or batteries making this live while they carry out their works. It is for this reason that solar inverters turn off in the event of a power cut.

It is possible to run a home off a battery during the power cut, but the controls for a conventional home battery are not currently good enough – if they don’t operate 100% perfectly, there would still be the risk of electrocution, and if the battery does not operate properly it does not ‘fail safe’.

Instead, backup battery systems have a relay to physically disconnect the electricity supply in a building from the grid (called islanding). It’s essentially a big switch, which detects that the drop in voltage on the grid in the event of a power cut, and disconnects the home from the grid. It needs to be located between your incoming supply and your main fuseboard, so you will need space for this.

This is what the Tesla Back-up Gateway does, for example.

How much storage capacity do I need for a back-up battery in my home?

You’ll need to decide what percentage of your storage capacity you want to reserve for backup. This means you keep your battery partially full with your emergency electricity. Most people are using home batteries for storing solar electricity, but battery levels can be low in the mornings. The worst thing would be to invest in a back-up battery system and have no stored electricity in the event of a morning power cut!

Getting the balance right will be crucial, and the reserve will be a portion of the battery capacity you do not use every day. If you set the reserve capacity too low, you won’t have much energy in the event of a power cut. If you set the reserve capacity too high, you won’t have the room to fully utilise the battery for its main job of storing excess solar electricity, thereby lengthening your return on investment. In practice, getting a back-up option is likely to require a bigger battery than just using it for storing and using your own slar electricity.

What appliances can I run off the battery during a power cut?

Home batteries have an integrated inverter that produces AC power for use in the home. The higher the rated power output of the battery inverter, the higher instantaneous power can be delivered to appliances at any one time. If you want to run lots of power hungry appliances from the battery during the power cut you’ll need a high-powered battery inverter.

When running a conventional on-grid battery system, peaks in power are often met by the grid. If your battery has a 2kw inverter, and you turn on a 3kW kettle, then it will source 2kW of power from the battery and 1 kW from the grid. During a power cut this wouldn’t be possible.

So, if you want the battery to run during a power cut, it will need a large inverter – so for example the 5kW of power available from the Tesla Powerwall2 would be able to run the kettle.

What if there’s not enough power from the battery?

If you do try to use more power than the battery inverter can provide, you might trip the battery inverter, and still end up with no power during the power cut! And of course, as the transition from grid to battery is smooth, you may not realise there is a power cut actually occurring. So how do you stop yourself turning on high power loads?

The only way to make this fool-proof is to separate critical and non-critical loads within the house, and run them off different circuits. All your LED lighting, efficient fridges, gas boilers, laptops, phones and even modern LED TVs take very little electrical energy to run and can be powered by most battery systems for extended periods of time. High powered appliances such as power showers, kettles, microwaves and electric cookers would be on a non-critical circuit that the battery cannot power.

However, this could mean a major re-wire for your building. Separating critical from non-critical loads in your house could be expensive and time consuming. In a recent situation, we found a tumble dryer was on the same circuit as a fridge freezer, so to separate them we’d need to run two separate ring mains to the kitchen. It’s not always the case, but separating appliances to different circuits could involve long cable runs back to the fuse board, re-chasing cables into walls and even re-decoration.

Instead of separating critical loads, in some situations it may be possible to fit a physical changeover switch. In the event of a power cut you would turn off the non-essential loads and physically flick a switch to get back-up power.

Will solar panels charge the battery when the grid goes down?

Are there any other changes needed?

The UK and Europe have different earthing regulations to the US and Australia. Back-up systems in the UK will need to be able to swap to a local earth if the house normally uses the grid as its earth.  This is something our engineers will deterne at the point of survey.

So is it worth it?

So although power cuts are rare, they are disruptive when they do occur. Furthermore, some areas, especially rural locations, are more prone to power cuts than others.

You’ll need to balance the extra cost of a back-up battery system against the benefits of riding through the power cut.