The Future of Electric Car Charging

The Electric Vehicle industry is a constant environment of change and innovation. This is after all, an industry spanning back to the 1800’s when the first small scale battery-powered vehicles were developed. Throughout the 19th and 20th Centuries factors electric vehicles were superseded by ICE Vehicles, but environmental concerns have driven the evolution of the electric vehicle and the ability to charge them in recent years.

Since the start of the 21st century we have seen a massive increase in uptake of electric vehicles and have seen the technology grow to provide vehicles which can match the demand of the public in terms of range, charging availability and charging speeds. Fast chargers, rapid chargers and lamp post integrated chargers are all now being widely deployed.  But what new electric car charging options are going to be appearing in the next decade?

Currently, the fastest available EV chargers on public networks can juice an EV to around 80% in roughly 30 minutes. This kind of charge comes from the Tesla Supercharger Network designed for Tesla vehicles operating around 150kW. However, with new research in to EV batteries, we could be seeing EVs charge in as little as 10 minutes for 200 miles of range.

Lithium ion batteries have the ability to store a large amount of energy in a small, compact battery. Scientists are now looking to increase the battery temperature during a charge from 30 C to 60 C. Charging at these temperatures can cause problematic reactions with electrolytes to form surface films, consuming active lithium. To combat this, scientists at Pennsylvania State University came up with the novel idea of keeping batteries at 60 C for just long enough to charge the car by using a thin nickel foil creating an internal self-heating structure, then cooling it to room temperature. This enabled them to charge the battery to 80% in 10 minutes without damaging it.

When it comes to innovation, centralised EV charging hubs are at the forefront. We are likely to see more of these hubs spring up around the UK as they offer a whole range of charging and power storage functionality. Dundee City Council are pioneers in the public electric car charging world in the UK. 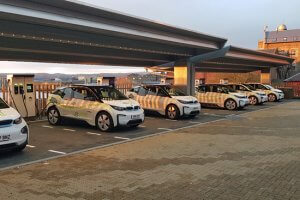 They have developed an EV charging hub in a central location in the city. The hub offers six rapid chargers (offering up to 50kW) and four fast chargers (offering up to 22kW). Also featured is a solar canopy and an energy storage system. This sustainable solution of using power generated from renewable energy and stored power is likely to be replicated nationwide in the future.

We all identify with the traditional EV charging methods; connecting a car to a charge point via a cable. As the mobile phone industry moved in to wireless charging, similarly, the EV charging industry is following suit. Wireless charging relies on magnetic induction to transfer energy between a pad on the ground and another under the floor of a compatible EV. Once the two pads are aligned, charging will occur at spends of 3.3kW, 6.6kW or 20kW. These could be an ideal solution for home charging in a garage or on a driveway; simply park up in the right place and your vehicle will charge itself up! In the UK, EVCI company Connected Kerb have announced they will roll out wireless charging technology in London, the Midlands and Scotland in the first half of 2020. 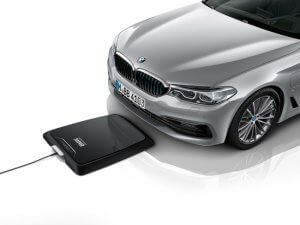 This technology can be taken further. Companies are developing wireless chargers embedded into the surface of the road, meaning EVs will charge whilst driving. As EVs pass along the road surface, they draw small amounts of energy from the induction pads. Whilst this doesn’t refill the batteries, they crucially don’t lose any power when on the move. Crucially, this technology would be revolutionary for the autonomous cars of the future. Completely eradicating the need for manual charging.

Owning an EV is now more than just a way of reducing your carbon emissions. Vehicle-to-grid technology (V2G) can give you control over your energy and even prove to be a commercially beneficial aspect.

It is envisaged to work in two potential ways – vehicle to home (V2H) would discharge the battery in your car to power your home when it is plugged in.  True vehicle to grid technology would go one step further and use energy stored in car batteries to feed back in to the national electricity network to supply energy at peak times. EV owners will also be able to make money from this technology by rewarding car owners for helping to balance the electricity network.

As more of us embrace this idea in future we will see cleaner air, smarter homes and energy self-sufficiency.

It is widely understood that the majority of EV users and owners will charge at home where they have off street residential parking. Currently there are grants in place to help accommodate home charging for residents. However, in July of this year the UK government decided to introduce legislation for all new housing the have a charge point installed as part of the construction process. This legislation will accelerate the efforts to achieve net zero emissions by 2050.

There has never been a more exciting time in the EV industry than there is right now. Moving forward we are already seeing ground breaking technology developing the way we use and charge EVs. All of this innovation will only make the switch from ICE vehicles to EVs smoother for the population as the UK seeks to abolish the sale of ICE vehicles by 2035.