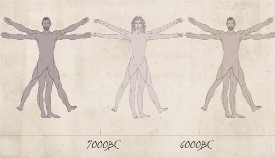 How to be a Good Ancestor

In this week’s blog, our Technical Director, Dr Chris Jardine, meets philosopher and author, Roman Krznaric.  Together, they discuss the importance of time horizons when thinking about sustainability.

Chris Jardine: We’re delighted to see you have a new book out – with a fascinating theme.  Tell us more about the concept behind the piece.

Roman Krznaric: It’s been more than three years since I last wrote a guest post for Joju but I’ve got a good excuse: I’ve been working on a new book called The Good Ancestor: How to Think Long Term in a Short-Term World.

The central theme of the book is one undoubtedly close to the heart of the Joju community: how can we overcome the pathological short-termism of the modern world so we can tackle the long-term challenges of our age such as the climate crisis? In other words, how can we become the good ancestors that future generations deserve? 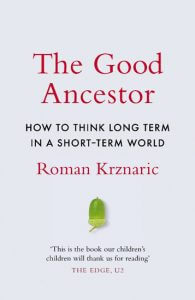 Chris Jardine: That’s a concept that’s really close to us in the green technology space.   When we install a charge point in a public car park, for example, it might not get heavily used in the early years.  But in 10-15 years, when 100% of cars are electric, it will be a critical piece of infrastructure.  Without sounding too pompous – in a way, we’re like the old farmer planting an olive grove.

Roman Krznaric:  The starting point of the book is to recognise that human beings are not simply short-termist creatures driven by immediate rewards and instant gratification – what I call the Marshmallow Brain (named after the 1960s psychology experiment where children who resisted eating a marshmallow for 15 minutes were rewarded with a second one: the majority failed).

We also possess a long-term Acorn Brain, located in the frontal lobe just above our eyes. This is a new part of our neuroanatomy – a mere two million years old – giving us a rare ability to think, plan and strategise over long timeframes. The Acorn Brain enables us to save for our pensions and write song lists for our own funerals. It’s how we built the Great Wall of China and voyaged into space. And if we’re going to kick the habit of fossil fuels and shift to a 100% renewable economy, we’ll need to use this extraordinary ability to become part-time residents of the future. Let’s recognise that we are not just short-term marshmallow snatchers but long-term acorn planters – or, as you put it, olive-grove planters!

I’ve explored this idea in an animated video called The Marshmallow and the Acorn. See if you can spot the solar panels!

Chris Jardine:   Talking of solar panels – I do think they are a great example here.  If you think short-term, you’re always focussed on the payback period, or return on investment.  If you think long-term, you can say “over its lifetime, solar panels will produce electricity 2, or even 3, times cheaper than buying from the grid.” That longer-term framing completely changes how you can think about green technologies.  So how exactly do we start to take a longer-term view in our day-to-day lives?  How do we become Good Ancestors?

Roman Krznaric:  The book reveals six different ways to think long-term, which can draw us towards a culture of longer time horizons and responsibility for the future of humankind:

Chris Jardine:  Ha, ha!  Cathedral thinking! This very week we’ve just completed an installation on Salisbury Cathedral. It’s been utterly humbling to work on a building that’s existed for hundreds of years and will still be there for hundreds of years into the future.  But it shows it can be done – our ancestors did it after all.

Roman Krznaric:  The barriers to forging a society based on the long view are formidable. But, as I argue in the book, when these six ways to think long are practised by a critical mass of people and organisations, we might just have what it takes to overcome the myopia that keeps us trapped in the present and continually clicking the Buy Now button.

Roman Krznaric is a public philosopher and author of books published in over 20 languages. His new book is The Good Ancestor: How to Think Long Term in a Short-Term World which is published by Penguin Random House, and available form all good bookstores on July 16, 2020.