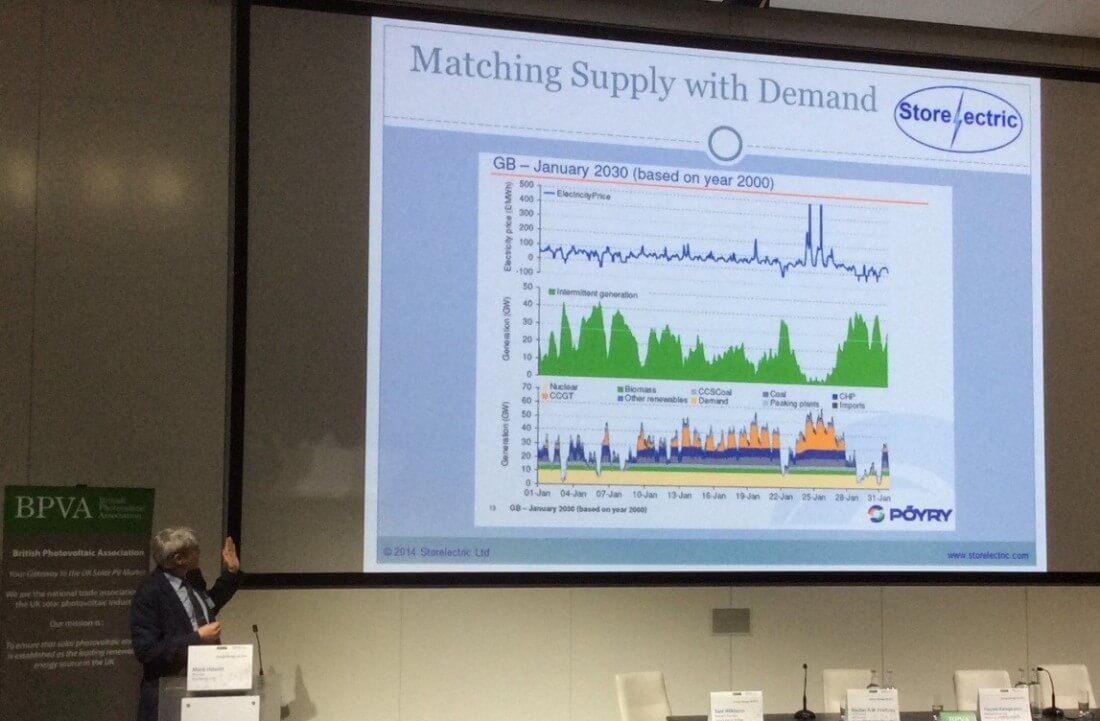 The spring ‘mini heatwave’ was warming up, the sun shining on London’s commuters, as we gathered in the crisp but sunlight-free basement auditorium of 30 Euston Square for the first session of BPVA Energy Storage UK 2015 conference (#energystorageuk2015).

Scanning the delegates, I could see that this was a room mostly full of engineers and experts, here to deepen their understanding of their sector.

I have worked in renewables and climate for ten years but I am not an engineer by training, so my challenge was to pick out the bigger picture messages from the detailed presentations that followed.

I arrived with three big questions – here is my summary of the answers I heard over the course of the day.

Well, yes. Resoundingly YES we need storage for our electricity, and yes the percentage of supply coming from PV will continue rising. Mark Howitt from Storelectric supercharged the beginning of the afternoon sessions with a barrage of graphs showing that the National Grid’s own projections showed its architecture collapsing within 20 years, and that is even before their over-optimistic assumptions were questioned.

“So we need A LOT of storage, we need it at ALL scales, we need everyone pulling together,” he said. (Mark Howitt)

The “all scales” is important: there are various roles that storage needs to play in allowing our electricity grid to receive most of its supply from renewables and continue providing the population with useful electricity: renewables run to nature’s clock, not human whim, and humans need electricity when they use it. Without storage the two cannot be matched up.

Storage technologies come at different scales with different balances of benefits, from large pumped hydro storage to batteries fitted into homes. But getting the right mix of technologies looks like a phenomenal challenge.  We have a chasm between where our current national grid infrastructure is and where it needs to be, and the size, cost and complexity of the bridge we need to cross is clearly significant. I started to feel over the course of the sessions like this was a wickedly complex puzzle, rather like building a car with no agreed design to work from and no one in charge. Imagine what such a car would look like?! Would you drive in it?!

So, what advantages could PV battery storage have in this mix? What counts in its favour as part of the solution?

Firstly, home battery storage, especially when attached to PV systems, can help to balance power demand and to even out the demand profile of an individual home or organisation. One more home with a smart battery is one fewer adding to the National Grid demand spike at half-time during the World Cup final. (By the way, the spike isn’t just the kettle going on – it’s the electricity cost of water being pumped for flushing toilets and filling kettles!)

Secondly, growth in storage capacity in the domestic sector has the potential to be driven by consumer demand, with homeowners and community investors leading the way.

Which leads to the second big question…

The best evidence for this came from Germany. SMA, a German inverter manufacturer (and a world leader in the sector) presented evidence from their field trials of their integrated battery–inverter product, called Sunny Boy Smart Energy, which also supports the user in changing their demand profile i.e. the time of day when they use their electricity, to help to maximise use of their solar power.

The key conclusions that SMA’s Michael Ebel presented were: firstly, that small scale batteries (2 kWh capacity) were the most cost efficient; secondly, that there is demand for them even though the financial numbers don’t yet add up. Purchasing a battery for your PV system does not yet make it a better financial investment in Germany, and yet numbers from the German Solar Association show a growth in the number of systems installed with battery storage (although part of a fall in the number of systems fitted in total): in 2013 it was 12.5 % of PV-plants below 10 kWp; 2014 it was 20%; and 30-40% projected for 2015 in 2015. SMA expect this percentage to keep growing.

So, in Germany it is the emotional drivers of having the most efficient system you can and being independent (increased ‘autarky’) that is driving the demand. Germans are buying batteries and paying extra in order to make sure they can use as much of their home-generated electricity as possible.

Nevertheless, clearly a huge factor in market growth will be the speed at the costs of the battery technology come down, and whether they will drop enough to make a financial case for buying them. Views on this were split, with some speakers and delegates citing the example of the rapid drop in PV costs in terms of £/Watt, and others countering that battery technology is a lot older and is also potentially limited by mineral resource availability.

And this leads us to the final big question…

A clear and straightforward answer was provided by Abid Kazim, UK MD of NextEnergy Capital Ltd. In his view the finances simply do not add up. The best hope for battery storage growth, he said, is adding huge battery packs to existing ground-mounted solar farms, probably at the point at which their old panels are replaced with new and much more efficient ones, hugely increasing generating capacity. Large batteries that would allow solar farms to increase their production significantly, whilst staying within their maximum export limits, would be attractive to investors and owners. This only holds if the cost of the batteries is lower than the financial returns from the increased capacity, and we are a long way off that at present said Kazim.

This simple maths highlighted the fundamental challenge for storage: putting a monetary price on the value it adds to the grid architecture.  Perhaps the most interesting (and concerning) part of the debate during the day was this: those authorities responsible for keeping the National Grid working are not really putting significant thought or finance into scaling up storage capacity in the UK.

“Are there any DNOs [District Network Operators] in the room?” a delegate asked in an early Q&A…. Silence.

An assessment of return on investment based on the current market structure for buying and supplying electricity (including Feed-in Tariff payments) cannot take into account the collective value to the grid, and hence to all of us who want to have reliable electricity, of each unit of storage added.

In this sense, every homeowner or organisation that fits a battery to their PV system adds to our collective resilience, a bit like everyone who chooses to get his or her child vaccinated.

Surely we need those entrusted with our country’s future to make a smart change in the market, so that there are good incentives at all scales – from homeowner to utility company – to add storage capacity and smart demand management? It seems as though the latter has received much more attention and funding than the former.

Hence the calls during the day for the government to create: firstly, a separate category for storage; and secondly to set up a dedicated government team to give it the attention it needs. Not all the speakers and panelists believed that a government subsidy was necessary to drive a growth, but there was clearly widespread support for an amendment to the Feed-in Tariff payments to include a financial benefit for those who buy a a battery with their solar panels… We await our new government to see the likelihood of this happening.

I end with a final thought from Storelectric’s Director, Mark Howitt: