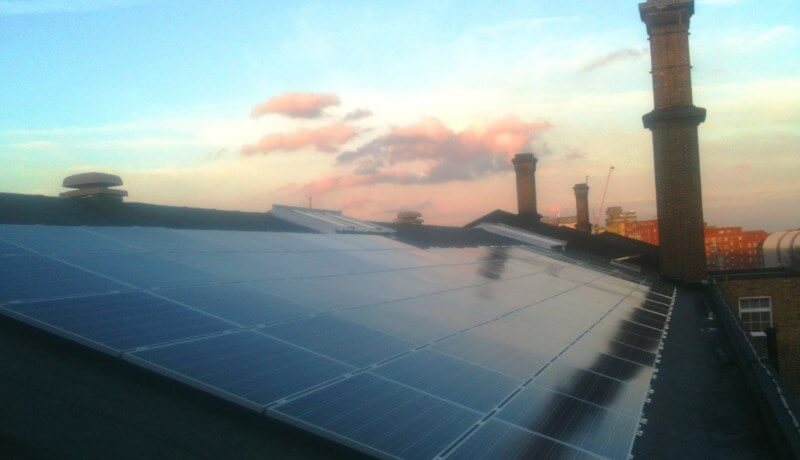 July 6, 2016 In Business and Commercial, Design and Technical, Featured

Joju’s installation at our London home in the historic Busworks building proves a success. Here’s a little history of our London offices and the role we’ve played in bringing this piece of history in to the 21st Century.

Joju’s head office in London is situated in the stunning Busworks building in North London. In 1888 the London General Omnibus Company took a lease on a plot of land adjacent to the Caledonian Market in North Road, Lower Holloway and it was here that they planned and constructed a production line factory to build and repair horse-drawn omnibuses.

Timber to build the buses was stored in a separate building at the western end of the factory and the buses were built in the main building in a staged and elaborate process, starting with carpentry, followed by all the iron work and wheel-making. The buses were then taken up to the first floor to be painted.  After that they went to another separate building to the rear to be upholstered and, finally, to have the beautiful advertisements sign-written on them.

Following the introduction of the internal combustion engine at the beginning of the 20th century  horse-drawn buses quickly became out-dated. The famous ‘B’ Type open-topped motor bus, used as both a troop carrier and an ambulance during the First World War, was designed at The Busworks and the first prototypes were built here.  However, the building was not suitable for a modern, mechanical, production line and the ‘B’ Type factory had to move to Elstree.

The Busworks itself continued to be used as a repair depot for buses until the 1950s.  Through the 60s and 70s the building was split into two, the Omnibus and United buildings. Omnibus being used by Fescol Ltd as a steel plating works up until 1977 and the United buliding up to 1985 by a shop-fitting company called Sleefords.

In 1979 architect Philip Lancashire and his business partner Gillian Harwood took a lease on the Omnibus part of building which was, by then, completely vandalised and leaking. Little by little they refurbished one area at a time as workspace for small businesses.Omnibus became a resounding success and, in 1985, Philip and Gillian were asked by Islington Council and the City of London if they would consider taking over more of the old factory.

At the same time Christopher Richardson, a theatre designer with offices in Omnibus, spotted the potential of the top floor of the old wood store and converted into a full-blown 300 seat theatre called the Pleasance Theatre, London. The ground floor of the wood store was opened as a brasserie to serve The Busworks residents in 1992 and it was named Shillibeers – after George Shillibeer who had lived in Holloway and who was renowned for starting London’s first ever public omnibus service in 1839.

Over the 123 years since it was built, the same walls have sheltered many different technologies from the manual labour of bus-building via motor engines to the many 21st century digital companies working in the building now. And now we’re happy to say Joju have brought Busworks in to a low-carbon renewable future with a solar PV installation, which we’re proud to say is really working for the building.

In November 2015 we installed a large array of 180 panels on the Busworks roof with a capacity of about 50kW. 6 kW of which goes direct to Drive Now, the electric vehicle company located at the Busworks building. The installation is now generating up to 20% of the electricity used by all the busworks buildings and all the businesses in them! This equates to running an electric car 70,000 miles per annum or powering 1000 computers.

We are very proud and pleased that the installation we fitted to busworks is a success. For Joju it demonstrates first hand that we believe both in the technologies we install and our desire to be a responsible corporate citizen.

We are committed to helping other corporate lower their carbon footprint, increase their efficiency and improve their reputation through solar installations, LED lighting and EV charging. If you are a business and/or commercial property owner looking to install solar PV on your buildings, then do not hesitate to get in touch.