Residential Sales Manager Jon Cowdrill discusses Tesla’s  recent announcement about its new solar roof tiles. Is it the future of solar roofing? Read what Jon has to say!

Elon Musk recently announced a range of new solar roof tiles in a presentation alongside the launch of Tesla Powerwall 2. (You can find the full presentation here).

Tesla Roof Tiles in the UK

At Joju Solar we are very keen to see the full specification for these products. At the time of writing there are no datasheets for us to look at and no UK release dates. In fact, we have been reliably informed that the products are at least a year and a half away from being sold in the UK.

Solar roof tiles and slates have been available for a long time. Some of the first installations completed at Joju Solar 10 years ago were solar tiles. 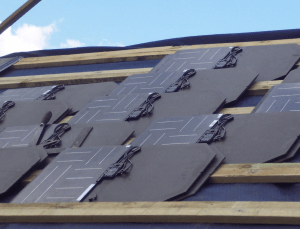 While we got off to a good start with the solar slates they haven’t been massively successful due to their higher cost and lower efficiencies. The current technology also has some technical limitations such as the requirement for up to three courses of regular tiles or slates around the edge of the array. It is also harder to use technology like individual panel optimisation or micro inverters with the smaller module sizes of roof tiles.

Where the new Tesla offering looks like an improvement is that their tiles appear to be installed right up to the edge of the roof. This is great news as it means a larger collection area.

When it comes to efficiency, however, we must wait and see. Tesla are claiming that the cells will be highly efficient. My hunch is that the cells themselves may be efficient however the per m2 efficiency must be quite low or relatively average when compared to regular solar panel roof tiles. It would be difficult for them to get close to premium, high efficiency solar panels* for the following reasons. When you look at individual tiles and slates there appears to be wasted space which is not taken up by a solar cell. In particular have a look at the Tesla Smooth Glass tile – you certainly wouldn’t get this amount of wasted space in a conventional panel. This is even more dramatic in the Tuscan Glass Tile. It appears that only around 50% of the tile is taken up by the cell. 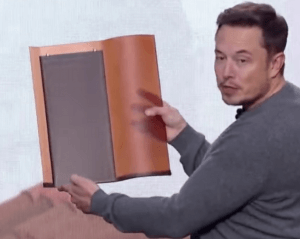 If you have limited roof space, you may be better off going for a high efficiency module instead, which does not have these unutilised spaces.

The other technical constraint mentioned earlier was that it is hard to make solar tiles work with optimisers and micro inverters. There is a good chance that Tesla will have thought about this and will have a way to link sets of tiles together and optimise them. This will be incredibly important, especially if we want to install on partially shaded roofs (not unlike the roofs in the Tesla presentation).

With regard to inverters Tesla has a close relationship with inverter manufacturer Solaredge, which come with optimisers as standard. Solaredge has the biggest market share for residential installations in the USA and many other countries globally. Making the tiles compatible with Solaredge will be important for Tesla. Also, looking at the presentation and seeing how those solar tiles were installed around window dormers and under trees, the panels would have to be optimised or very cleverly wired to prevent significant shade loss. Have a look at the Solaredge video for an explanation of what happens if a portion of a solar array is shaded on a traditional string inverter.

Lastly we can try to attempt to make some predictions on price. In the past, Tesla have surprised us with price but it’s hard to see these products being as cost effective as traditional solar. The regular solar panels we install on roofs are the same as (or similar to) the ones that are installed in huge solar farms all over the world. They are mass produced on a vast scale and it will be tough for Tesla to compete in terms of price per Watt (at least in the short term). My prediction is that Tesla will start by offering a premium product at a high price point and will try to bring the price down as they increase production. Ultimately it will be a balance of cost and efficiency vs aesthetics.

Solar Roof is an exciting development and in true Tesla style it seems they have announced the product well ahead of the actual launch. If your re-roof or new build is a few years off, it would be worth investigating closer to the time and comparing with a traditional array. It would certainly be worth registering your interest on the Tesla site now. This is a brave move from Tesla and SolarCity. The solar market is already very well developed and competitive in terms of price, aesthetics and efficiency. While Tesla pioneered the electric car market they have some tough competition from a well-established solar market. Let’s hope the new Solar Roof tiles will be a welcome addition.

What are current offerings on the Market?

The current solar slates like the Solar Century C21E  or the more expensive but realistic looking GB-sol slate are often seen on sensitive buildings such as churches and other listed buildings. However, their use has not been that wide spread due to the constraints mentioned above.

A much more popular and cost effective measure would be to integrate a more attractive “all black” module using an “in-roof” fixing system. The all black panels have a black frame, black mono crystalline cells, and a black back-sheet. They have a neat finish, which will blend particularly well with dark slate or concrete tile roofs. There are various systems for mounting in-roof ranging from watertight, low profile trays, which fix directly to the roof batons or sheets of flashing membrane. An in-roof system would be a good option particularly for new-builds or when you are re-roofing. There is  a slight additional cost when compared to traditional on-roof solar. However, you would be able to make savings by not having to install slates and tiles where the panels are located. 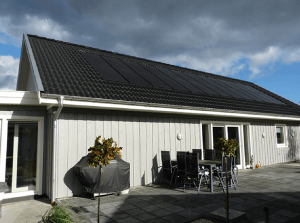 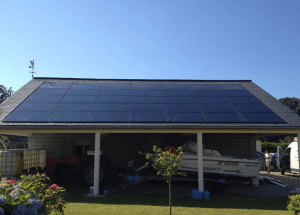 When it comes to the aesthetics of solar panels, generally the choice is yours as there are very few planning constraints. Domestic solar panel installation is permitted development, even in conservation areas (although there are a few limitations). See the guidance here. The exception to this is if there is an “Article 4” in the conservation area or if you are in a listed building. **

This is all good news for potential solar customers. It means you can make your own mind up on which type of solar you go for, whether building-integrated solar tiles, recesse3d in-roof systems or conventional modules

Update: On 10th May 2017, Elon Musk announced that the solar tiles would be going on sale.  Additionally they also announced the product will come with a warranty of the lifetime of the house, or infinity, whichever is sooner.  This so-called infinity warranty shows their confidence in the durability of the product, which is glass encapsulated.  It is important to note this warranty does not cover the performance of the solar cells which we would expect to degrade slowly over time as all conventional modules do.

For those of you reading in the UK, the product will not be available until 2018, so you won’t be able to get your hands on this immediately.  However, we have a very good relationship with Tesla, being certified installers of their battery systems, and we expect to be installing their roof tile product once it is available.

So, if you’re keen on a Tesla roof tile system, we will be able to start the design process for your project in advance of the product being available in the UK.  We expect to receive product datasheets and pricing information shortly and at this point our project managers will be able to return you a quotation.  Do send us details of your project via our “Enquire Online” form, or if you’d rather  give us a call on 0207 697 1000.