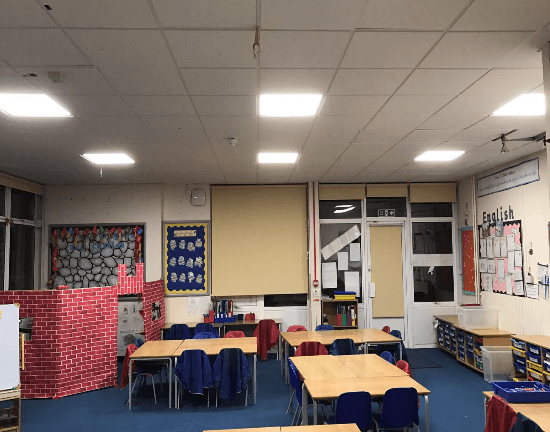 All schools and teachers know that the environment in which children learn and work in is crucial to both their education and how they behave. Negative work spaces can create negative behaviour and limit a child’s opportunity to excel. Lighting plays a crucial role in creating a positive working environment and too many classrooms around the country still have inefficient lighting, issues with broken lights, flicker, and mismatched colours, which can all hamper the learning environment . Many schools are beginning to realise the potential for improving their classrooms through LED lighting, which is both aesthetically more pleasing but also creates light more conducive to learning. Green Oak Primary school is one such school who saw the potential in installing LED lighting to improve their school’s learning environments.

In Autumn 2016 Joju replaced 68 existing luminaires (light fittings). Dated and flickering batten fittings were replaced with sleek slimline LED panels that sit in the recessed ceiling. Rooms that originally had lights of different colour, which is unsightly to say the least, were all replaced with cool white LED lights. Flickering lights have been replaced with modern, instant-on lamps that have transformed the classrooms.

The LED installation at Green Oak will reduce energy bills by 5,600 kWh per year. We estimate that to be a saving of £611 per year (that’s about £10 for each fitting). Over the lifetime of the LEDS they will deliver over £12k of cost savings and when all benefitsare taken into account we expect a payback of four years. LEDs need replacing less often than fluorescent tubes, which offers significant maintenance saving. This will be especially true in the two-storey sports hall, where specialist access equipment is required every time a fluorescent tube fails.

The Headteacher of Green Oak school, Miriam Morris said “Joju provided a fantastic service to Green Oak working at all times in a professional manner at the school. They installed the lights during half term, so it didn’t have any adverse impact on us in school. The job was completed efficiently and on time and the results are fantastic. The LED lighting has made a real positive difference already to the aesthetic and working environment of the classrooms where they have been installed. It has changed things so much that many of the staff thought that the school had been completely repainted when they came back after the week of holiday!”

The project at Green Oak was funded by grants raised by Wey Valley Solar Schools Energy Co-operative, a member of Joju’s long term community energy partner, Energy4All.” Project co-ordinator Rachael Hunter said “We know from past experience that working with Joju will always be a pleasure. The service and knowledge of the project manager was second to none and we always feel confident in Joju’s ability to complete a job to the highest spec.”