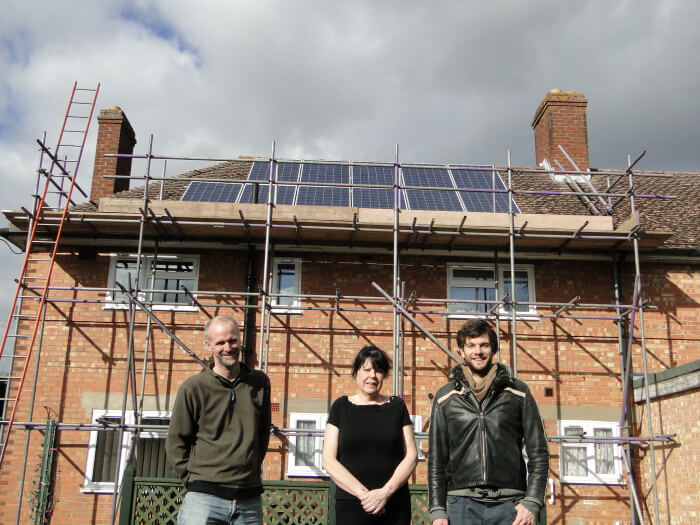 Does ERIC hold the secret to 100% local electricity supply?

Guest Blog by Andy Edwards, Project ERIC on how to create a more equitable low-carbon society.

There is a real buzz coming from an otherwise little-reported community in east Oxford called Rose Hill. This year it has become a hive of activity as community engagement workers whistle about on their bicycles, tradesman and vans go from house to house and local media bods have been seen brandishing microphones and oversized lenses, eager to speak to local residents.

Why the sudden interest in a community that is too often remarked as being one of the most deprived areas of Oxford, with 25% child poverty and fuel poverty amongst many of its residents? All signs point towards a new project called ERIC (Energy Resources for Integrated Communities) that began in the area this year and is changing the way local residents view home energy, with the potential to send ripples across the UK.

Moixa’s Maslow battery (seen above, beside council tenant Mr Dillon), with its smart software and accessible web-interface, allows households to view how much energy they’re generating, consuming and storing minute-by-minute, wherever they are. It has the potential to revolutionise the way we approach household and community energy in the UK.

As regular readers of this blog and energy aficionados will know Solar PV is becoming much more widespread across the UK with generation now at over 6,500MW, almost 100% growth in 2014. However, without a means of creating a better match between household energy demand and the supply of solar (or other distributed renewable generation) UK citizens will continue to be faced with rising energy bills and a high-carbon, increasingly unstable electricity network.

Currently only 25-30% of electricity from domestic solar PV installations is used within the home because when the sun in shining a home’s demand for electricity is lower than its PV supply. So the surplus  is exported to the grid at a financial loss to the household and subject to inefficiencies through distribution losses. The Maslow battery offers a real solution to this now, available at an installed cost of £2,000 direct from Moixa. Moixa suggest they can store and shift enough solar energy to pay back over comparable periods as a solar PV system by increasing the amount of solar PV used in the home to around 50%.

Project ERIC is taking this idea a few steps further with some big ambitions. Looking beyond individual households it seeks to cluster solar PV and other forms of distributed generation and battery storage across a community. In doing this, Project ERIC is hoping to show that it can make 100% of the solar PV energy generated in Rose Hill available to the local community. The implications are significant and could be a large  step towards creating semi-autonomous, locally owned and controlled renewable electricity grids.

ERIC will be working with up to 100 households to demonstrate these benefits. Perhaps more significant than its scale, however, is the fact ERIC has completed its first 60 installs on council and social housing properties. Tenants of these homes , many of whom are in fuel poverty, would otherwise not have access to this flagship technology. These tenants are enjoying immediate reductions to their electricity bills, which makes up an ever-increasing proportion of the household budget. Mr Dillon, pictured above, says he rushes downstairs on a sunny morning to read his electricity meter and see how much money he is saving!

JoJu Solar led the first 30 installs of solar PV with Oxford City Council (OCC), working to a very ambitious schedule in order to achieve the best possible Feed-in-Tariff. JoJu and OCC stuck to their schedule and have been extremely supportive in helping the ERIC team support tenants and maximise the learning’s within the project.

ERIC is also developing partnerships with the Rose Hill Primary School and the new community centre (working with Oxfordshire County Council and the Low Carbon Hub). Both of these buildings are set to receive a large installation of solar PV later this year. The Project ERIC team will look to install a bank of batteries in each location as well as initiating an electric vehicle (EV) car club, to be sited at the new community centre. The EV will be operated by Co-Wheels providing a service to the whole community. It will also act as a significant energy store and will be charged up using  from local surplus solar PV energy.

Project ERIC hopes to complete all installations by the end of this year and will be monitoring homes and working with households until April 2017. During this time Bioregional and Oxford Brookes University will be heading up the community engagement and monitoring respectively, whilst Moixa will be developing their software technology enabling households to maximize the use of renewable energy consumed within the community.

Through Project ERIC, Rose Hill has been firmly placed on the map of communities at the forefront of low carbon innovation in the UK. This not only means lower energy bills now for households most in need, but could also mean a significant change in the way the community relates to and uses energy.

Bioregional are looking to extend Project ERIC’s message beyond renewable energy generation and storage to join the dots between renewables, demand reduction and fossil fuel extraction. Bioregional will be leading a range community events and school workshops over the summer with Rose Hill Primary school that will ask the question; what does a more equitable, low carbon energy system look like?. Bioregional are linking up with campaigners and environmentalists working with frontline communities, that are resisting the expansion of fossil fuel extraction.

To find out more about Project ERIC and upcoming events you can sign up to the project ERIC blog by visiting, localisedenergy-eric.org.uk or email Andy Edwards directly, andy.edwards(at)bioregional.com.