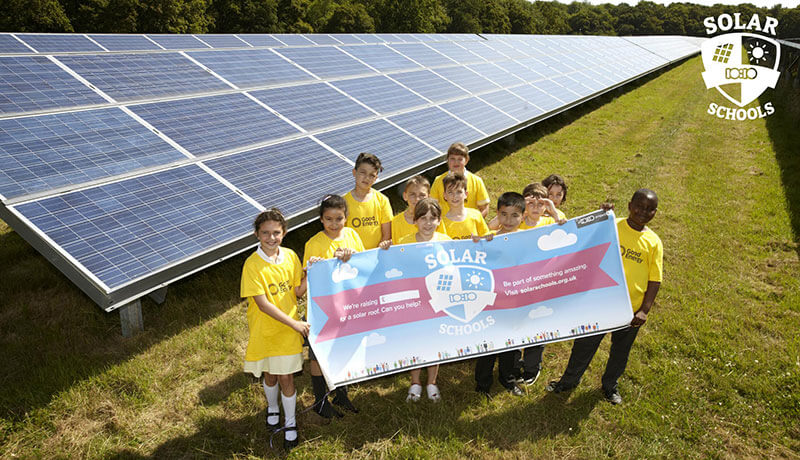 Joju’s installation team spend most of the summer holidays climbing on the roofs of empty schools, and fitting the panels that will power the schools for years to come. One such school is Turner’s Hill Primary School, near Balcombe, on which we recently installed a 16 kW solar PV system.

Balcombe, a quiet village in West Sussex, hit the headlines in the summer of 2013 as the site of large protests against fracking by Cuadrilla. Out of a village meeting around that time came REPOWERBalcombe – a community energy company that aims to generate the equivalent to 100% of Balcombe’s electricity demand (approximately 3 MW) through community-owned locally-generated renewable energy.

We interviewed Millie Darling, project manager of 1010’s Back Balcombe campaign which has worked closely with REPOWERBalcombe for the last two years, about developments in Balcombe.

Joju: How does it feel for you, to see so many communities, especially ones like Balcombe under threat of fracking, taking ownership of energy generation?
It’s absolutely brilliant, to come from protests two years ago to where we are now in Balcombe is a great achievement by the volunteers that have made it happen. It’s fantastic that the story of Balcombe has inspired other communities to generate their own electricity too.

Joju: How can people learn from and replicate successes in Balcombe for their community?
Firstly, if you’re planning to do a community PV project, then pre-accredit the site as soon as possible!

Anyone can do a community energy project. The first thing to consider is what sites in your community might be suitable for solar panels, for example, schools, community centres, barns, and the like. Then take the process from there and speak to other community energy companies for advice.

The most difficult part of the process has been the shifting policy environment for community-owned renewables. For example, REPOWERBalcombe registered as a co-operative but more recently community groups haven’t been able to use this business model.

Joju: What’s next for REPOWERBalcombe?
The next big plan is a 5 MW solar farm a few miles to the East of Balcombe, which would much more than meet REPOWERBalcombe’s aim of matching the village’s electricity demand. The planning application is in for this, so watch this space.

Also, lots of nearby schools have contacted REPOWERBalcombe about getting solar on their roofs, so we hope to enable them to do that, and will be pre-accrediting sites as soon as possible.

As well as saving schools money on their electricity bills, the income from the electricity generated is pooled into a community benefit fund, which over the coming years will be spent on education about renewable energy in schools in the local area.