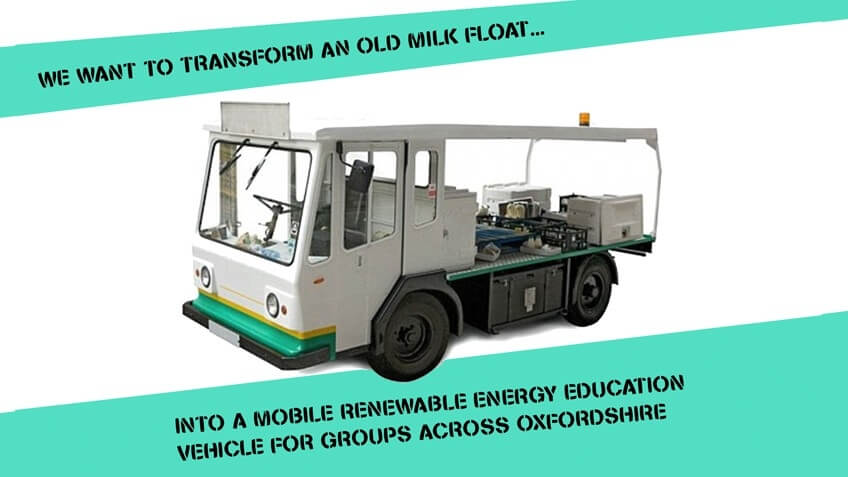 September 1, 2015 In Business and Commercial, News and Events

Joju interview Andy Edwards from Transition by Design on their ambitious plans for a clean tech milk float.

We interviewed Andy Edwards from Transition by Design on their ambitious plans for a milk float.

Oxford-based Transition by Design (TbD) and Bioregional have been shortlisted for a couple of great community energy projects as part of the M&S Energy Fund and now the winners will be chosen by popular vote.

Joju Solar: So what’s this we hear about breathing new life into an old electric milk float?

TbD: That’s right, we were inspired by seeing a similar vehicle that has been created at Westmill Solar Farm in South Oxfordshire and wanted to create something even more ambitious, that would be accessible to every Community Action Group (CAG) in Oxfordshire and any community looking to find out more about renewable energy technologies. It will also be a great way to power group events.

Joju Solar: will kids get excited by that, in the age of Smart phone multi gameplay computer games?

TbD: Judging by the reaction from kids in classes we’ve worked with over the summer, on subjects ranging from fuel poverty and energy democracy to building your own solar charger, I think we can say yes, definitely!
Kids already get this stuff, it’s logical and intuitive to save energy and switch to renewables for a fairer society and healthier environment. Plus if there’s something they can poke, prod, turn or build then you very quickly see the eyes light up.
Joju Solar: Are CAG outreach events well attended already? Will the new mobile exhibition help?

TbD: There are already over 60 CAGs in Oxfordshire. Together the network runs over 1,000 events per year, attended by over 60,000 local residents. Its the largest network of its kind in the UK and we think this kind of tool could give the network and its groups a real boost.

Joju Solar: we hear you also have plans to build a classroom of the future?!

TbD: Thats right, we’ve been working on a great project called ERIC (Energy Resources for Integrated Communities) that you previously featured in the Joju blog and following on from a series of solar panel building workshops we ran at the school we wanted to create a permanent teaching tool – a classroom powered by renewable energy that pupils can engage with and learn from.

We hope to retrofit a classroom at Rose Hill Primary school with solar PV panels linking directly to a smart Maslow battery. This will power DC LED lights, laptops, gadgets and an interactive display to create a ‘classroom of the future’ as a learning and engagement tool for pupils.

Joju Solar: We like the sound both both of these projects. Where do we vote?

TbD:You can vote for both projects as they are in different categories (simply click on each of the links following the titles below to do so):