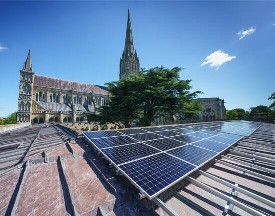 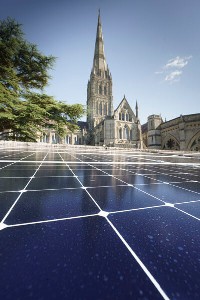 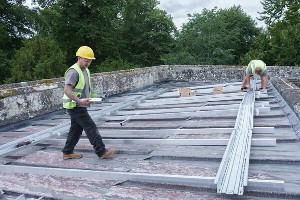 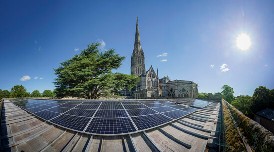 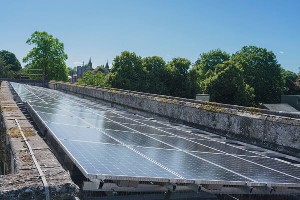 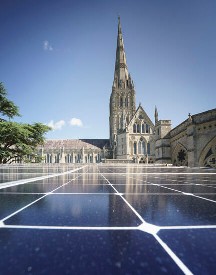 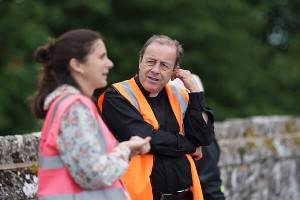 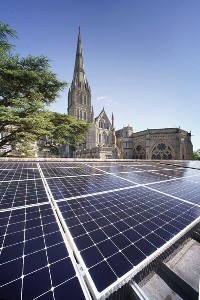 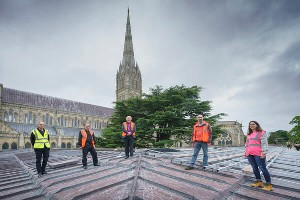 How did a small local community energy group end up building one of the most iconic renewable energy projects in the UK?  Well, it turns out dedication, perseverance, and a little good fortune are all you need.

Salisbury Community Energy is a relatively new community energy group.  They were formed in 2017 by a group of Salisbury residents who were trying to address climate change within their local area.  Director Caroline Lanyon explains “When we started we had a simple question: how can we get more renewable energy in Salisbury?”

In their early years, Salisbury Community Energy looked at a wide range of possible projects, and all possible renewable energy technolgies.  They finally settled on developing a solar power portfolio, as potential hydropower schemes on rivers in the City looked complex due to Environment Agency concerns about the flood plain, and potential opposition from local anglers.

The group started scoping out a portfolio of solar PV projects in Salisbury, mainly on local schools, but with other large community buildings also considered.

Almost inevitably, someone suggested that the group should approach Salisbury Cathedral about the possibility of installing solar panels there.  However, the group didn’t expect much of a response.  “Local environmental groups had been pushing for the development of a solar array on the Cathedral since the 1990s”, said Caroline “But they’d always been refused”.

But as a new group, Salisbury Community Energy thought it was worth a shot, and they decided to try the door one last time.  To their surprise, it opened!

The Planning Process for Solar on churches

Canon Treasurer Robert Titley from Salisbury Cathedral was instrumental in making the scheme happen. As a local community group, Salisbury Community Energy found a receptive ear as Robert was already implementing a range of green initiatives across the Cathedral, including draft-proofing the medieval building, moving to a green tariff energy and installing LED lighting.  His faith and environmental vision went hand in hand.  “We are called to preach good news, and through this we are taking another small step toward being good news for God’s earth and not just part of the problem”.  Solar panels were an obvious next step, and the idea of a high-profile project appealed.  “It’s important to send a message to the rest of the city”, he added.

At around the same time, the Rt Rev Nicholas Holtam, Bishop of Salisbury was appointed the Church of England’s lead bishop for the environment.  He has recently signed a letter to the Government asking for the environment to be part of its post-COVID-19 plans.  He was naturally fully supportive of the idea of putting solar panels on the Cathedral.

However, before the project could happen, the proposal needed to pass through ecclesiastical planning.  Town planning rules cover development on most churches and local council planning departments adjudicate on them.  But as a Cathedral, especially a unique historical one, the proposals had to pass the scrutiny of church bodies instead.  As one might imagine, it is not an easy process to pass through the many internal committees.  They are very stringent, and rightly so – they do, after all, have a duty to protect these buildings of national importance.

Eventually, the scheme was approved, subject to specific design criteria being met:

But just as the project was gaining traction – a new hurdle appeared.  The Government planned to remove feed-in tariffs in April 2019, leaving just months to get this project, and other schools in the portfolio pre-accredited.

Salisbury Community Energy approached Energy4All’s Schools’ Energy Coop for advice.  They had years of experience in pre-accrediting community energy sites. They agreed to help with early project development stages, such as gaining EPC certificates.  They also managed the financial raise for the scheme when it went eventually ahead.

And this is where Joju Solar joined the team!  As the long-term installation partners for the Schools’ Energy Coop, we were asked to come up with a design that met the ecclesiastic planning committees stringent design requirements.

The project team chose the cloister area for the solar panels. The panels are not visible from the ground, and there is a parapet wall surrounding them.  This helps keep the panels hidden from view but does give local shading issues.  The church left some dummy panels on top of the cloister roof for several months before the build to see if these would be visible from the surrounding area.  It turns out they weren’t!

Because no direct fixings were possible, we decided to use panels mounted on a ballasted frame.  As a roofing material, lead is quite unique in that it is soft, and it moves around a lot as it expands and contracts in the sun.  Clamping on to the ‘broom handle seams’ is not a possibility as it would soon cause a hole around the fixing points.

Joju decided to work with solar mounting system specialists Sunfixings on this project.  Sunfixings have extensive experience in designing solar PV mounting systems for lead roofs and were an obvious technology partner for this project.  The roof has a stepped surface, and is generally a little uneven and not quite straight (it turns out our laser lines are more accurate than 800 years old craftsmanship).  The design team settled on a fully adjustable frame to ensure there was good contact at the right places over the surface of the roof.

It’s not just the panels; of course, there is also the wiring to consider.  The cables were collected under the array, then ran in a discretely positioned basket tray, on rubber feet, following the line of the roof.  The wires ran to the new café and gift shop section, which as a modern extension meant we could finally drill a hole to get the cables to the inverter and consumer unit inside.

The solar array was finally built on the Cathedral in July 2020, as soon as we were able to come out of lockdown safely.  The system features 37kW of high-efficiency Sunpower 400W modules.

The system was formally opened by The Bishop of Salisbury.  His words, perhaps best sum up the scheme:  “The Church of England is working hard towards a Net Zero carbon footprint by 2030. I am delighted that Salisbury Cathedral is making a contribution that takes us towards this. With clear purpose and helpful partnerships even iconic buildings can make a difference towards sustainability. In these strange times the possibilities of living differently seem all the more important and this project even more significant.”

So, was this iconic project all just a stroke of good luck?  Did it only get built because the community group approached clergy who happened to be passionate about the environment? And then chanced to meet other partners to help with the financial raise, project development, design, and build?

Or maybe we all make our own luck, and the more we try to make our visions a reality, the more likely we are to find others who feel the same way. And then great things can happen. We like to think so, and we expect to see more historic buildings sensitively incorporating solar over the coming years.

All photos by the sublime Ash Mills.