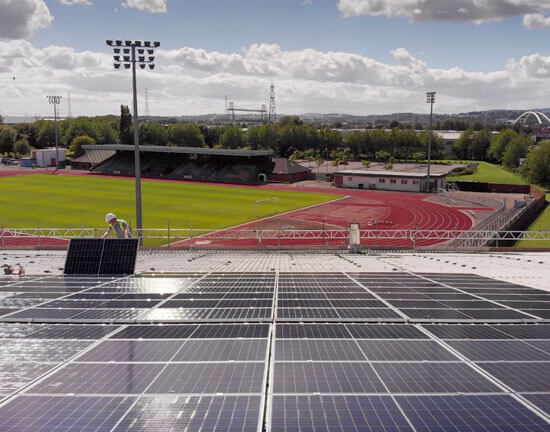 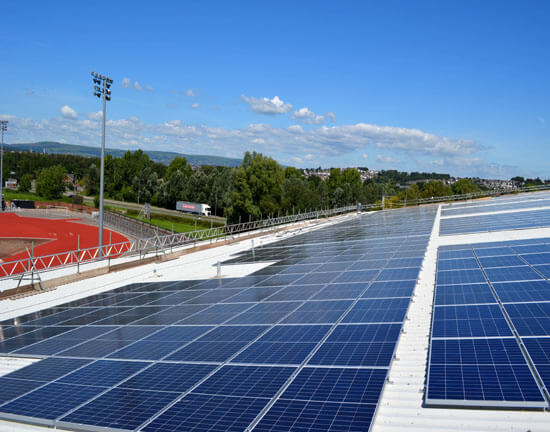 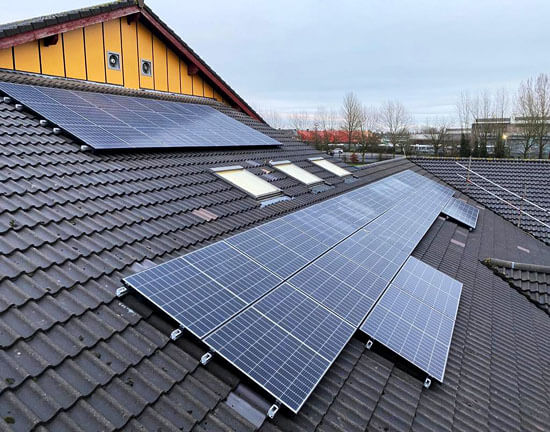 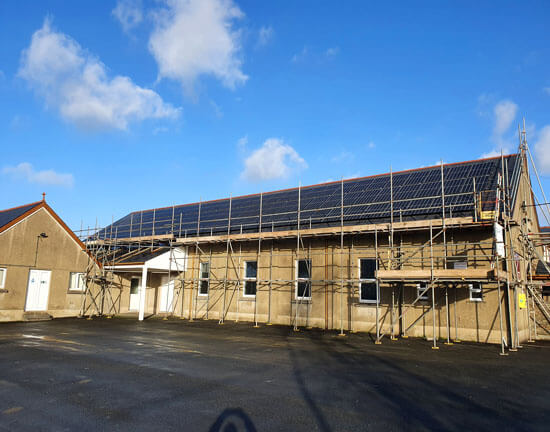 Egni Coop and Joju Solar have developed and installed the most ambitious community solar scheme in Wales, including the largest single community solar rooftop at Newport’s Geraint Thomas velodrome. It’s quite a story – here’s how we did it.

Awel Amen Tawe have worked in a  long term partnership with Energy Service Wales – a governmental organisation funded by the Welsh Government to support community energy in Wales.  The Welsh Government has ambitious targets to reach 1GW of local generation by 2030, and 70% net renewables in Wales.  The aim is for councils to be zero carbon by 2030.

Both Awal Aman Tawe and Energy Service Wales were always on the lookout for new initiatives to save carbon.  As Dan McCallum explains “We’re in a former coal mining area here, so we’re trying to promote a green economy”.   When community energy projects were granted a 1-year extension to the feed-in tariff when it was removed in April 2019, it opened up a window of opportunity and the formed the seed of an idea.  Could they pre-register sites across south Wales for community solar rooftop schemes?  And work in partnership with local councils to find these sites?  It seemed a great way of delivering MW of community renewables in one hit …

And so Egni Coop was formed as a joint venture between Awel Amen Tawe and Energy Service Wales to deliver this programme of community solar PV projects across the south of Wales.

The newly formed Egni Coop approached Newport Council and Swansea Council for their cooperation in the scheme.  These councils put forward sites to participate in the programme, and project managers at Energy Service Wales carried out the feasibility studies. “We couldn’t have done it without the councils being on board”, explains Dan. “The level of buy-in and commitment right across multiple departments of Newport Council has been unique.”

The coop secured a loan from the Development Bank of Wales to fiannce the construction of the programme of solar instalaltions.  At the same time, they ran a share offer and raised £1.94m from the community.

Egni Coop pull the team together

With the project taking shape, Egni Coop needed a trusted installation partner.  They approached Joju Solar due to their long history of delivering multi-MW community energy schemes across multiple sites in previous years.

Time was ticking by this point – it was already November 2019.  Joju mobilised surveying teams, and project managers to design and specify the systems.  By the first weeks of January, Joju Solar were on site, and the building programme commenced.  All was going well until Storm Dennis struck South Wales in February 2020.  Unsafe to build, the sites were shut down until the storm had passed.

The programme was rearranged, and more teams were added to enable completion by the end of March.  The teams had just caught up when unforeseen issues struck again.  With COVID-19 spreading rapidly through the population, the last remaining sites to be built were shut to visitors.  The remaining two sites in the programme, including the flagship 500kW array installation on Newport’s Geraint Thomas Velodrome, could not be installed.

All is not lost!

That might seem like the end of the story, but there is a happy ending.  To the surprise of many, the community energy feed-in tariff was given another 6-month extension to the end of September.  As lockdown eased, Joju Solar were able to install the Geraint Thomas Velodrome project safely during June.  Now commissioned, it is the largest solar roof in Wales.

Overall the project will generate 1,650,000 kWh of electricity per year, saving 412 tCO2 per annum.  The host buildings will use most of the green power generated directly on-site, reducing the council’s carbon emissions.  The remainder will be exported to the national electricity grid.

The solar panels in Newport have been financed by a loan from the Development Bank of Wales and Egni Co-operative‘s community share offer which has raised £1.94m to date.  Crucially, the benefits of the scheme are captured locally.  As Jim Cardy from Energy Service Wales explains: “The income from the project will be spent in Wales, the finance came from Wales, and the shares are owned by Welsh residents.”

This collaborative project is an excellent example of how a community group and a local authority can join forces to help deliver low carbon solutions. It’s a perfect example of how to Build Back Better after COVID-19.

The schools have all received £500 of shares in the project, which will generate an income stream for them over the next 25 year.  Providing community benefits in this way links to entrepreneurship education by demonstrating a co-operative model in practice.

Egni Coop are developing an educational portal to show generation data, which can be used in teachers lessons.  Egni Coop will be employing an education officer to provide services to the schools and develop resources in line with the Welsh National curriculum.