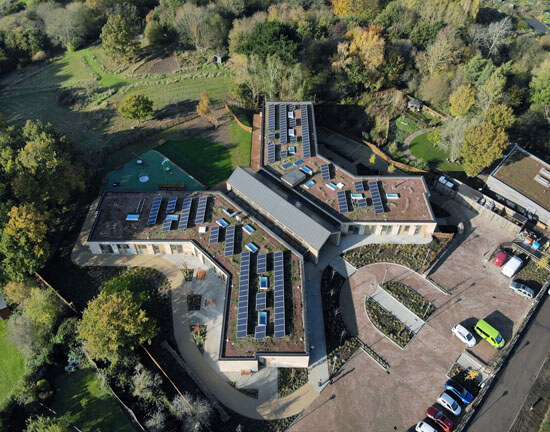 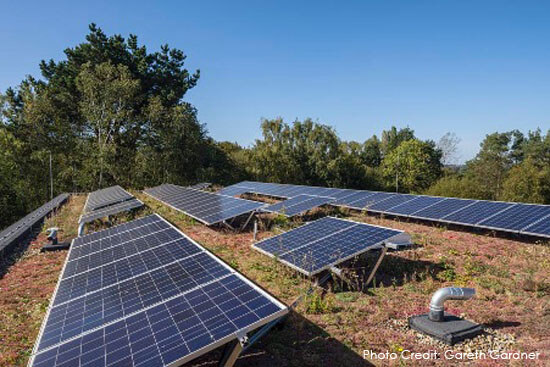 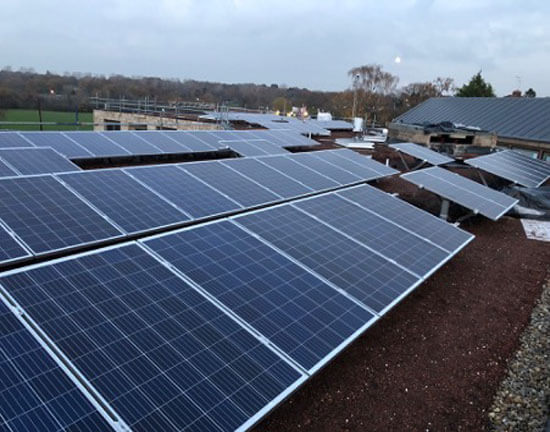 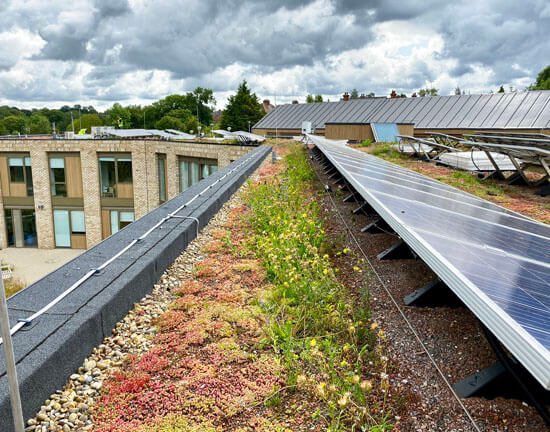 A Biosolar Roof for Noah’s Ark

Noah’s Ark Children’s Hospice make moments matter. They help seriously unwell babies, children and their families make the most of the special time they have together, providing clinical, emotional and practical support to over 300 families across North and Central London and Hertsmere.

The hospice wanted to support an increase in the scale and quality of their work and to do that, they needed a new building. ‘The Ark’, a highly sustainable ‘home-from-home’ and an inspiring space for palliative care, relaxation and adventure, launched in September 2019 and was constructed within their nature reserve in Barnet, becoming the first new hospice building in London for ten years.

The realisation of The Ark was a combination of an incredibly successful fundraising appeal which raised over £12million, architectural design by Squire & Partners and collaboration between a number of construction and sustainability professionals – all playing their part to create this iconic new build. At Joju Solar, we got involved when creating ‘a green roof with a difference’ became part of the plan.

A Green roof with added solar

Bridgman & Bridgman in partnership with Bauder Ltd began the construction of The Ark’s green roof and the idea was to create a living, wildflower meadow in the sky, to support native wildlife as part of the building’s strong connection with its natural setting.

It was also important to make The Ark as self-sufficient as possible from an energy perspective, which meant installing solar PV on the green roof. The solar was being funded by the community through Energy 4 All, which significantly reduced the overall capital expenditure of the project (saving over £84,000 in energy costs to the client over a 20-year period). We’ve worked closely with Energy 4 All on a number of community-owned, green energy projects and they invited us to be part of the team – to install 171 solar PV panels so that both green roof and solar worked together in harmony.

When installed correctly, that’s exactly what Biosolar roofs create. PV panels can work more efficiently on a green roof, as green roofs help to keep the temperature around the panels at the optimum 25 degrees celsius. A hotter micro climate can result in loss of panel efficiency, so green roof and solar is the perfect partnership from that perspective. Efficiency was critical in this very special new build, to make sure the hospice would receive as greater yield as possible.

Solar panels can also create shaded areas underneath them, which encourages a wider variety of vegetation to grow on a green roof. That means the combination can help different types of species to thrive and in a nature reserve setting, this worked beautifully.  Look how the wind protection allows taller species to grow near the panels!

The installation utilised Bauder BioSOLAR – an integrated mounting system made stable by green roof layering and vegetation, removing the need for penetrating the waterproofing to secure the mounting units to the roof. It was ready for us to install the solar panels on to, with the frame sitting around 300mm higher than the line of the roof. This allowed growing room for vegetation without blocking any light to the panels and also meant light and moisture could reach beneath them to support any vegetation or wildlife below.

The seeds were planted following our PV solar install and once the mains electricity install was complete, we returned to commission the 46.17kWp system.

The combination of green roof and solar on The Ark was a winning one. Not only did it encourage biodiversity and fulfil the goal of generating the building’s electricity, the project won the “Roof Gardens/ Living Wall Installations – Commercial Roof Garden or Podium Landscaping – Under £500k” award in the BALI National Landscape Awards 2020. It’s also the first time a community funded green roof with PV panels has been used in the UK.

As the Mayor of London, Sadiq Khan, said when the building opened:

“Noah’s Ark has been a beacon of light for the children and families it serves, so I’m delighted that they have a brand-new home,”

and we’re proud to have been able to play a small part in helping to make this peaceful sanctuary sustainable.