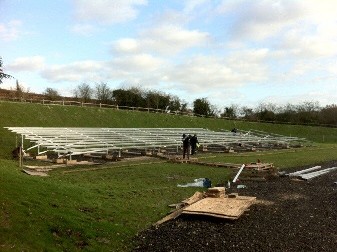 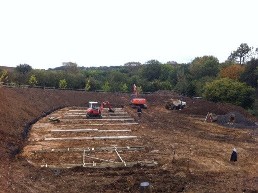 On the grounds of Chilworth Manor

Chilworth Manor is a historic country house located in Surrey. The manor, itself, is grade II listed by English Heritage. In 2011 Joju were commissioned to install a ground mounted solar array.

Joju installed a 50 kWp ground mounted system at Chilworth Manor. The system consisted of 196  Siliken 255Wp Polycrystalline Modules, and three SMA Tripower 15000TL inverters. It was mounted on a bespoke aluminium frame on concrete foundations. The electrical connection was trenched and ducted with 120m SWA cable from array site to the client’s plant room.

The Manor and, therefore, the installation are in the Surrey Hills, which is a designated area of Outstanding Natural Beauty. Joju Solar had to work very closely with the local planning authority and also Chilworth’s consultants to design an array,  which was dramatically hidden from view from the surrounding footpaths, whilst at the same time not compromising on the maximum performance of the array.